Venturing into territory Beyond… patty, that is

Beyond Burger® continues to steer the ship in the veggie patty grub wars.

With Hollywood superstar-turned-environmentalist Leonardo Dicaprio joining the latest ranks of entrepreneurial and philanthropical influencer-ship, what became apparent is an unexpected meeting of gastronomy and global sustainable development that has crept into the consumer market. What is sure to come the PLT (aka, plant, lettuce, tomato) hype is a vision for a new fake food economy, where the future of protein is a redefinition of meat itself. Here, genetic modification bypasses the general stigma behind GMO, and paradoxically poses itself successfully as a healthier, more environmentally conscious alternative.

In addition to consumptive trends aligning with a more socially responsible and awakened turn, the two major giants of faux food – Beyond Burger® and Impossible Foods® – continue to dominate; although, one seems to be gaining an edge in vendor preferences lately and has transformed into a high-profile celebrity darling. Beyond Meat® has already accumulated a coveted superstar fanbase, with Dicaprio pouring in major advocacy and investments (a venture not unlike that of Bill Gates, and Jay Z, among others) and has begun lauding its benefits on social media in the hopes of influencing an otherwise primarily meat-led western culinary palate.

Although, Beyond seems to be outranking its main competition in its purportedly ‘cleaner’ list of ingredients, claiming on its website:

THE WORLD'S FIRST PLANT-BASED BURGER THAT LOOKS, COOKS, AND SATISFIES LIKE BEEF WITHOUT GMOS, SOY, OR GLUTEN. FIND IT IN THE MEAT AISLE.™

In terms of ingredients, the two burgers are similar, except for their main protein source, with Beyond Meat® opting for pea instead of soy protein, and rejecting the use of soy leghemoglobin (or heme, Impossible’s key ingredient that gives their burgers the notorious “bleeding” quality). Whereas Impossible incorporates various (some claim potentially harmful) genetically modified products, Beyond touts the innovative use of more wholesome ingredients, like natural beet extract to derive the red color that gives their patties their signature “meat” quality. In fact, Beyond underwent a recent revamp, pledging an “even meatier” patty, adding the classic ‘marbling’ effect of actual ground beef, making it a more complete protein source by incorporating a new “blend of pea, mung, and rice proteins,” and a new look that starts out red and changes color (to brown) when cooked, due to an added extract from apple, which affects the overall noticeable aesthetic without compromising flavor.

Beyond Burger® shows no signs of slowing down, hitting major grocery stores in NON-GMO packaging indiscernible from other traditional beef patty containers, and raking in a slew of national and regional restaurant chains, as well as locally trending LA-based resto-institutions in the vein of Stout Burgers & Beers, Plan Check Kitchen + Bar, Smashed Burger, and Founders Ale House.

Despite Beyond’s dismal performance in the stock market of late, which prompted early backer Bill Gates to partly (and quietly) cash out, it remains to be seen which of the two major alt-meat players will continue to reign as frontrunner in the ever-burgeoning plant-based meat industry. 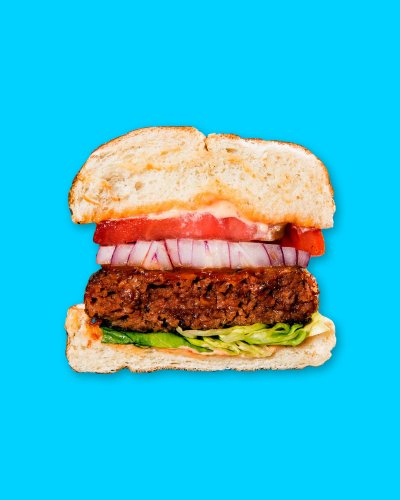